Being a Nosy Math Teacher rather than a Bossy One 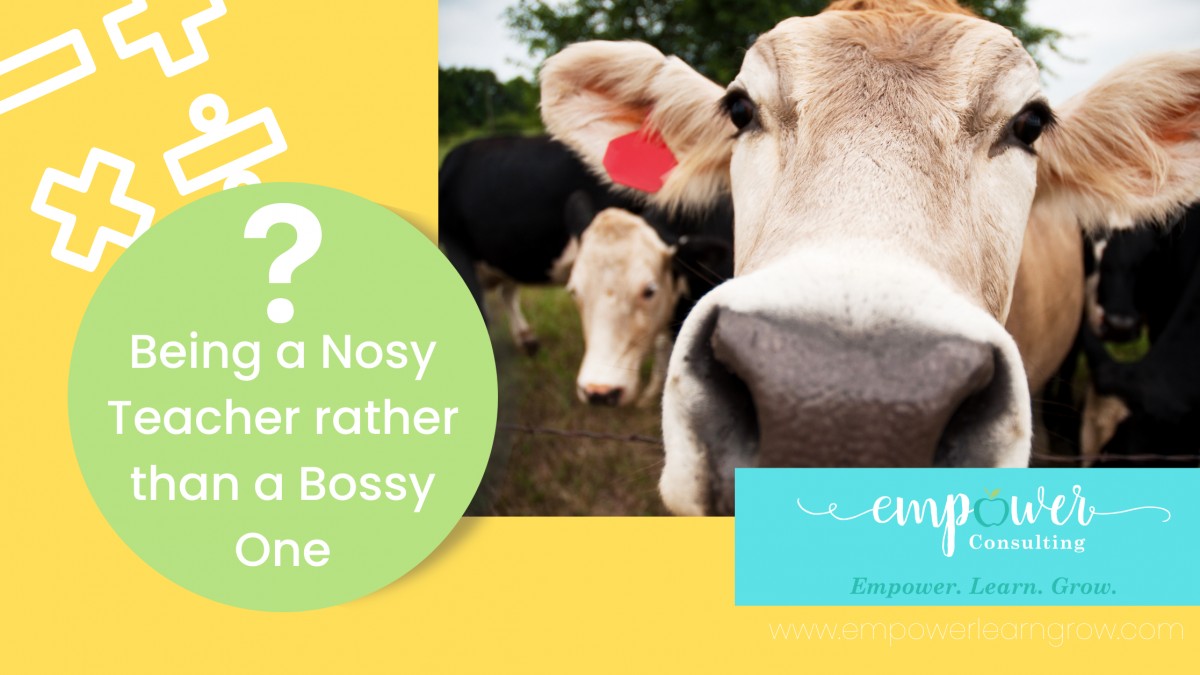 Would you say you’re a nosy person, a bossy person, or both?

I’d have to say in my personal life I’m a little bit of both. My younger sister and older brother would both agree I may have been a bit ( a lot) on the bossy spectrum as a child. I thought I knew how things should be done and I wasn’t afraid to tell everyone around me.

I agree with that popular meme:

“I’m not bossy, I have leadership skills!”

Now, as an adult, my husband would agree that I am a bit nosy. We both believe it is one of our “gifts” that we are expert eavesdroppers! We love having dinner with each other, but also end up harmlessly listening in on some interesting conversations.

I don’t watch a ton of t.v., but I do love a good reality t.v. show. I think this is not because I approve of the lifestyles portrayed through these shows, but because I generally like listening in on other people’s lives. Who doesn’t? Whether this is right or wrong is not my question for today.

So, I have something wild to propose.

What if you could incorporate the character traits of nosy and bossy people into your classrooms? I’d like for you to consider what makes up a nosy or bossy person and how those traits can impact your teaching. Think back to the bossiest person you know and the nosiest, and see if their characteristics could be turned into a habit in the classroom that either aids student-centered learning or detracts from it.

Let’s break down the general characteristics of both. Of course, these are generalizations, and my hope is you won’t take offense to the terms ‘Nosy’ or ‘Bossy’ and instead decide how these traits parallel teacher behaviors in the classroom and most importantly, how it impacts student achievement.

Nosy Nellie as a Teacher practices in an inquiry-based classroom.

Characteristics of this teacher includes:

A nosy person isn’t the same as a judgmental person. A nosy person might hear info and then judge that info. I’m suggesting in the classroom you stay a neutral, nosy person. Nosy people are very curious and ask questions that reflect their curiosity. A curious person is genuinely interested in understanding, not in merely persuading he/she to her side. This can be used in the classroom by asking questions like the ones below.

A nosy person isn’t the same as a person who is intrusive and begins to talk about themselves (or their methods) or offers advice. A nosy person stays curious. They ask questions to understand more and to get more information.

A nosy person listens in on conversations around the room as students turn and talk or work in groups. Your only goal isn’t to walk around to ensure they are on task. Your main goal is to dive into their thinking and hear and understand what they understand.

A nosy person knows they won’t receive any more information if he/she is intrusive and obviously uninterested in the person they are being nosy about. A Nosy teacher stays curious as well as empathetic. Most importantly, a nosy person keeps the person talking because they want to keep on finding out information!

The following questions and comments could be used.

When you are nosy, do you turn it around to yourself and what you need, or do you keep it about the student—where they are and what THEY need? A nosy person isn’t the same as a selfish or self-absorbed person. They are the opposite. A self-absorbed (although I don’t truly believe that’s who we are trying to be in the classroom) teacher is focused on everyone doing it ‘her’ way or getting ‘her’ answer.

As a teacher, it is. Are you listening to every child, every day? Are you taking time to listen to student thinking, or are we listening merely for the right answer? This is different.

I can already tell, math friend, that you are probably thinking of ways to incorporate Nosy Nellie into your math classroom and lessons.

But before that, meet Nosy Nellie’s cousin- Bossy Betsy.

Just like Nosy Nellie, Bossy Betsy has many characteristics that are sometimes used in the classroom.

Characteristics of this kind of teacher include:

Being quick to correct and offering unsolicited advice:

This teacher is ready to give their own feedback before a student can figure it out on their own. The intention is to move the student on so they can understand the material, but in reality, the student is not able to think for themselves and must rely on their teacher to do the thinking.

They may assume some students already get it and they will be bored, or assume others don’t understand and need lots of guided help. Both are dangerous in the classroom. A Bossy Betsy is too interested in acting on assumptions instead of finding out what the students know/can do independently.

As a child, I assumed my sister couldn’t tie her shoe. So I’d boss her to come over to me so I could tie it for her. Not helpful to her in the long run, and came to find out, she knew how she just wanted me to do it for her.

What if we didn’t assume and instead we were nosy?

Acting as a “know it all”

The “know it all” knows all the right answers and best methods to solve math problems. They’re not interested in your methods because theirs is better.

As a “know it all” in the classroom, students begin to see us as their tickets to success. When they don’t know, they know we will tell them. Even if they do know, we are sure to tell them how to first. How can we flip the script here? Be nosier. You can ‘know it all,’ but get there by being nosy.

This is a tough one in the classroom, but it is something for which to be mindful of. How can we stop a student who is going on and on without sending them a message that their idea is unimportant?

“May I interrupt for a moment? I can tell you have a lot to say about this…I’m wondering if we can have the class move to…. And I’ll come over to hear you out. I really would like to hear more.”

Now that you have seen the differences between Nellie and Betsy, what do you think? You can probably tell that I am a fan of Nosy Nellie over Bossy Betsy.

I’d like to encourage you to be nosier and less bossy. In a student-centered classroom, we are all about what students understand, know and can do. We have plans, goals, and methods, but they are built off student’s understandings and methods, not scribed for them.

Being nosy is much harder than being bossy. It’s easier just to tell someone what to do or think than it is to inquire and remain curious so that the learning comes from and is owned by the student. We aren’t looking for perfection, just forward progress.

Try it out. Do you feel empowered? BE GREAT—and being great means mean better than yesterday. Report back to me. Give me all the great details as you dive into your student’s ‘mathematical business.’ I want the full scoop!