The Most Important Thing a Math Teacher Can Ask 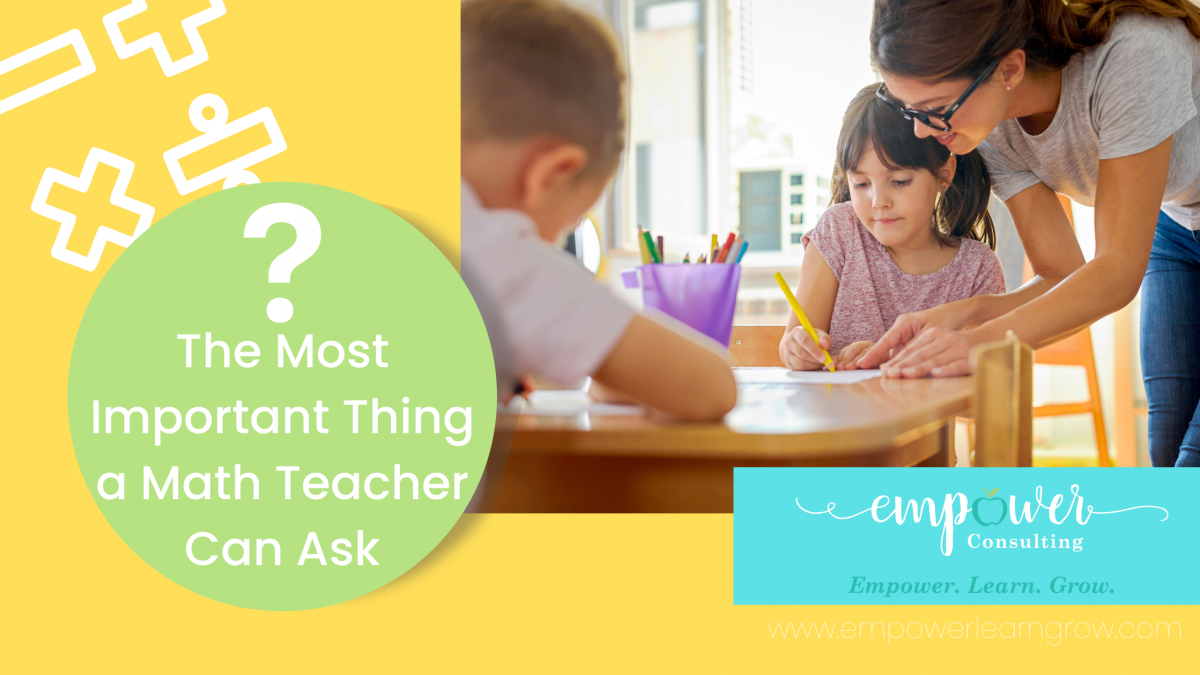 The most important thing you can do in your math class as a teacher is this: when a student answers a question or comes up with their answer, press for reasoning and seek understanding.

There have been so many times where I have been teaching a math lesson and made an assumption that a student is thinking exactly what I am thinking! They have the answer I was thinking of so, of course, our thought process must be the same for this math problem.

I’ve been so wrong in many of those situations.

Before making assumptions, I ask students one simple thing after they have explained their thinking- SHOW ME.

“Tell me why you chose…”

These questions, I find, are even more important than the first teacher’s move of “explain your thinking.” Students explaining their thinking is so important, but we have to seek to understand beyond their explanation as this is where the true thinking lies.

I was in a first grade class once where students had a handful of rubber bands. The first grade students were practicing a lesson on putting objects into a group of ten or extra.

Teacher: “How did you choose to count?”

Student: “We counted by tens.”

At this point, the student has explained what they did, but now I would like for them to show me.

Teacher: “Will you show me how you counted by tens?”

The first-grader proceeded to count her rubber bands – ONE. AT. A. TIME, but giving each rubber band the count of ten.

When she showed me, I immediately understood. She was counting by tens, but had missed the idea that in order to do that, she needed a group of ten to call it a ten.

Notice, correcting a student is never part of this “show me” step. As difficult as it may be, don’t jump in and correct your student to reveal the misunderstanding! Strive to understand. Not to correct. I could have easily corrected her mistake, but I knew the power of students coming to their own understanding was more important.

Teacher: “Tell me why you chose to count by tens.”

Student: “Oh that’s easy because my teacher says to “Work smarter, not harder.”

Teacher: “Well that sounds like a good reason to me, too. I love counting by tens. Let’s look at the group behind you and see how they chose to count by tens.”

The student and her partner turn around to face the partnership behind them. I ask that group to defend how they counted.

Students: “We counted by tens”

Doesn’t this answer sound familiar? It is the same reply the first student had given me. However, their thinking was different.

Teacher: “Can you show us?”

They proceeded to point to each group of ten and count by tens.

Continuing my questioning, I turned to the first set of students.

Teacher: “Hmm, this seems the same, yet different from what you did. What do you think?”

First Student: “Oh! I get it! We need to put them into groups and then count by tens!”

I did step in after this and continued to explain a bit further about this misunderstanding, but something really important happened without me having to really intervene. The students influenced each other. How powerful is that?

Student: ”Well I first put them into groups of 5, but then I thought, “Hey, two fives make a ten and that’s even faster, so I put the two fives together everywhere and then counted by tens.”

The mistake I made here is making an assumption of what the student had done to find his answer. I took the beginning of what he said and made an assumption in an attempt to keep the conversation moving forward. If only I had asked them to ‘show me’ how they put their objects into groups of ten instead of assuming they had counted by ones…

In the very same class, I approached another partnership. As they finished counting, I asked them what their original estimates were for their objects.

Teacher: “So, what do you think, was your estimate close or far from your actual count of 83?”

What I want to say is, “Oh, sunshine! 16 is not close to 83. 16 doesn’t ‘look’ like 83 as a group.” along with my concern for this child’s understanding of magnitude comparison.

Instead, I remember the most important thing I can ask.

This is a version of “show me,” where although I am concerned he doesn’t know how far the numbers actually are, I allow the student to take the lead and explain themselves. What is important about my question is I didn’t take him over to the number chart, show him 16 and then show him 83 in my desperate efforts to have him see how far we were from the actual answer. As we approached the 120 chart, I asked him to show me his estimate. Fully expecting him to point to 16, I was very surprised when he pointed to 60!

Those pesky pairs! This is a very common math mistake for a first grader. When he pointed to 60, I asked him to read the number. Sure enough, “Sixteen.” (You can grab my free pesky pair poster here).

Teacher: “Do you think this number is far or close to 83?”

Notice, I didn’t capitalize on the error, I wanted to see, based on his understanding of the number if he still thought it was close or far.

This tells me that he does get it. He wasn’t as far off as I had originally thought. He didn’t lack the magnitude comparison I thought he lacked. He didn’t need an intervention. I just needed to ask him to SHOW ME.

Read about helping your students understand if their answers make sense here.

Teacher: “Wow, that’s what mathematicians do. They prove their ideas. I bet next time your estimate will be even closer. But would you look at my mouth while I say this number?”

The next thing I do is I say the number sixty and write the word name. I then point to 16, I explain how he is saying sixteen for 60 and how I can completely see why he might do that (empathy, our most powerful teaching trait). I have him practice saying the numbers.

Boy, was it worth it to ask him questions and press for reasoning! I am so glad I did.

Math friends, does this happen to you as often as it does to me?

Sometimes I’m in kindergarten math class and students will answer my “how did you know” question with “I counted my fingers.” When I say, “Show me,” I find they didn’t count their fingers because as they try to demonstrate for me they are saying two numbers (or more) for every one finger. So they obviously had another way but they have heard other students say they counted their fingers, they’ve heard me say that’s a good strategy, and they think that’s the answer. I don’t think they are trying to be deceptive, I think they are telling us what we want to hear and they aren’t sure how to explain what they actually did.

In the upper elementary grades, when I ask, “How do you know,” I get lots of great thinking, but it is always followed up by, “Show Me,” or “Tell me More,” etc. This is where I uncover that they didn’t actually get the numbers from the problem, they got them from their neighbor. They didn’t actually count by 1/4ths they grouped them into 2 and counted by halves.

When we don’t ask our students to show us, we risk getting the surface answer and not digging in to reveal the misunderstanding or understanding.

I work on this every single day and I understand it is no easy feat. It is so tough as we are pressured by the time left in math class, trying to keep up with our pacing guide, that stopping to press for this reasoning seems out of the question. But, every time I do this, I am so grateful and have so much more to discuss with the class. I’m really TEACHING kids because I know what they really know and don’t know. It’s not easy, but I am committed to believing students are getting more out of my lessons when we dig deeper than when I go with the right answer and move to the next question.

My challenge to us both is to move into the most important teaching move and ask just one more question, or push reasoning just one more time to each answer you are given.

I can’t wait to hear about it!