Why I won't ever publicly post data charts or have data walls in the classroom... 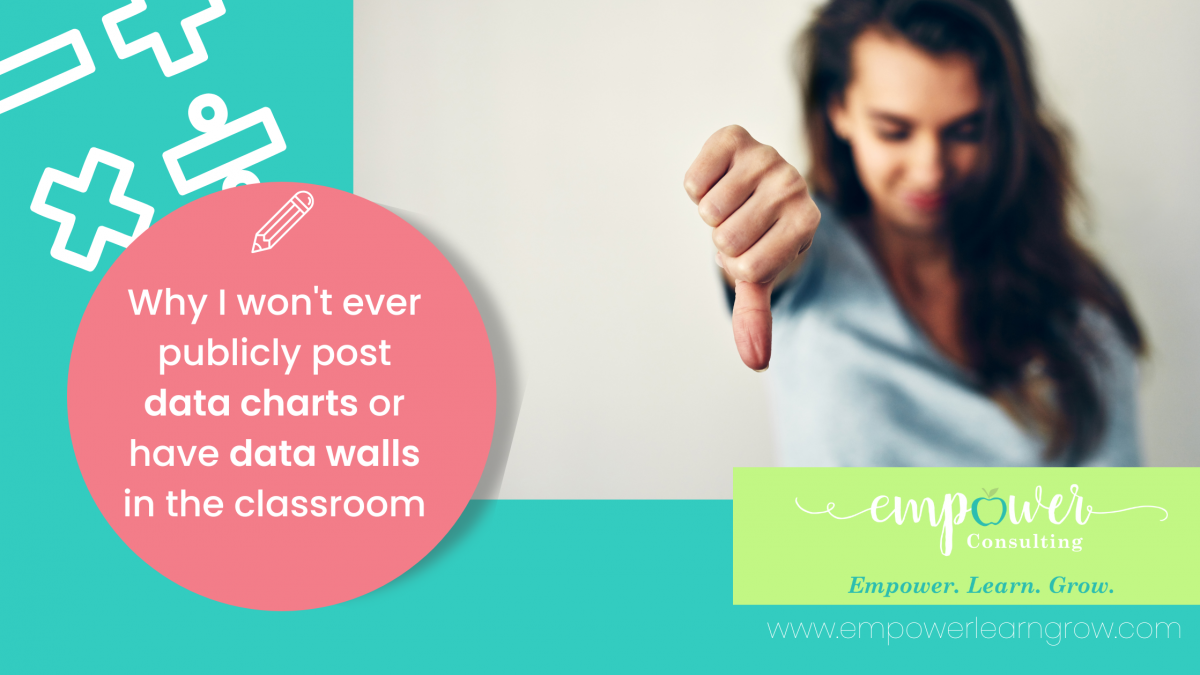 This will probably rub some teachers and administrators the wrong way, but I won't ever again publicly post student data or behavior in the classroom.

I think every teacher, at one point or another, has displayed student achievement whether that be on data walls, behavior charts, Accelerated Reading charts, and so many more.

Many teachers may still have these data walls in their classrooms.

I used to display all the student data and achievement I could. You name the chart and I probably had it up in my classroom. Behavior charts with red, yellow, and green cards as well as Accelerated Reading competition charts. The more charts in the class the better (or so I thought).

But my most infamous public display of student data and achievement was my ice cream scoop bulletin board. In fact, I was KNOWN for it. Many incoming third graders already knew about this chart before they had even stepped foot in my class.

I look back at that now and know all it did was cause shame for many students. What I would do to know then what I know now.

Knowing how important multiplication facts were in third grade, I decided the best way to make sure my students knew their facts was with a competition.

Students received a reward in the form of an ice cream scoop after each timed test that they passed for a particular multiplication fact. We’d add whipped cream, bananas, syrup, and other toppings for each new passed test.

With each passed fact, I would add a scoop to the child’s bowl that was so proudly displayed on my bulletin board.

At the end of year, there would be an ice cream party where students received their hard-earned reward for passing their timed tests.

Boy, was I wrong.

I need to make it clear that those scoops students earned on the bulletin board were for passing a timed test, not for mastering their facts.

I now know there is a difference.

So, what happened to students who just COULDN'T get a scoop?

I'd attempt to motivate them even more. I asked them if they wanted ice cream!

Every one wanted ice cream.

And yet, the same students kept struggling.

I'd pull them to do extra flashcard practice with multiplication cards, I'd cheer and encourage them even louder.

Some students took the same timed test of a multiplication fact multiple times and still not pass it.

I finally realized what the problem was.

The problem wasn't a lack of motivation and it certainly wasn't the ice cream.

The biggest problems with these timed test for multiplication facts and the public display of student data was the system.

It was a system that caused stress and unnecessary pressure for my students.

It was a system that prioritized a timed test over actual mastery of the multiplication facts for my third graders.

Although my intentions were pure, I never realized how demoralizing it must have been for the students who did not thrive in this flawed system. They must have seen the other students that were good at memorizing and compared themselves to them.

The message I was unintentionally sending to these students were that they were not good enough, not fast enough, not smart enough in comparison to their peers.

I now understand students did not need a visual representation that showed how they didn't yet know their multiplication facts in third grade.

For the most vulnerable learners, these data walls, achievement displays, and public display of successes only promote shame.

When I displayed their passed multiplication tests, I know I wanted to not only send the message of ‘You can do it!” I wanted students, all students, to have a growth mindset and to know they weren’t there yet, but they would be! But what happens when they weren’t?

Did they need the visual reminder day in and day out of how not up to ‘par’ they were?

For my most vulnerable learners, was I helping or hurting?

I have always believed in goal setting and goal getting. I just now believe it doesn’t need to be a competition with everyone else, nor does it need to be a public shaming event. Some kids thrive off this competition, and so I’d love for them to be rewarded for beating ‘themselves.’ The goal isn’t to be the best. The goal is to be THEIR BEST.

Did most students know their facts for third grade? Yep, and I was proud.

Did they keep that fact mastery come 4th and 5th grade?

Honestly, I doubt it as most upper-grade teachers complained students didn’t have it.

We must ask ourselves honestly, did they ever master their multiplication facts at all or did they just want to be rewarded?

Did those kids memorize quickly, store the info in short term memory (high school flashbacks anyone?) just to take the test, pass, get an ice cream scoop and move to the next fact? I thought I was helping. I truly did have good intentions. I believe now I just needed to make a few tweaks to my plan and the first one is taking down those darn ice cream bowls!!

I truly believe collecting student and class data can help us as teachers. Data is necessary and important. I no longer believe it must be displayed on a bulletin board. Students also do not need to be pinned up against each other to show progress and success. This causes more harm than good, especially in those vulnerable learners.

I truly believe all students CAN master their facts. I no longer believe the sole way of doing this is through memorization. But I do believe I was promoting memorization as the gatekeeper to math fact fluency and this was a harmful practice. This sort of memorization for the short-term goal of an ice cream scoop was a temporary fix to a much larger math fluency issue.

Looking back, I now see how harmful these data charts and public forms of student tracking were for my students. I ask you to put yourselves in your students' shoes and rethink your data walls, behavior charts, and any other public display of student achievement you may have up in your class.